Heard of 'slow food'? How about 'slow fieldwork'... 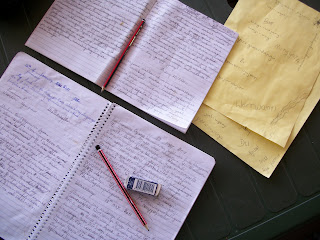 My last couple of trips to Ngukurr to continue fieldwork on Marra have seen a slightly interesting development. Me and the Marra gang I work with at Ngukurr have continued our work nicely, going through old untranscribed recordings and also making new ones. What's changed on the past couple of trips is how we've been doing the transcriptions and translations.

Last year when we started, most of the time I'd play recordings and the Marra gang would listen, repeat the Marra for me and translate it into Kriol, and I would enter it straight into ELAN. This is, I guess, a fairly standard way for linguists to work, with the linguist being the scribe and generally it was efficient and rewarding.

But some sessions I'd encourage them to do the transcribing and practice/develop their Marra literacy skills. We had one long recording in particular that was perfect for this where the recording contained English translations and the Marra was only words and basic sentences. Most of the other recordings are higher level texts where the Marra comes thick and fast, so not so well suited for training purposes.

But that was last year - fast forward to this year and two of the old ladies I work most with may have invented what I could jestingly describe as 'slow fieldwork', analogous to the 'slow food' movement that gets bandied about.

On the last few trips, whenever we've gathered to do transcription, BR and FR get their books out and write down everything, no matter what the text is or how hard and fast the language is. It takes a lot longer, but it's so great that they want to do that - I don't have the heart to be a bossy, efficient time-manager and say 'No books today, just tell me what they're saying and what it means'.

On the downside, this way of working is sooooo laborious. BR and FRs Marra literacy skills are good (BRs are pretty great actually), but still, long words will throw them, consonant clusters will throw them and they concentrate so much on transcribing that sometimes they're not focused on good translation. It can really test my patience. Like, a long word comes up that I'll spell for them, then when it comes up two sentences later they sometimes act like they've never seen the word written before when they only wrote it 10 minutes ago! Haha... makes me weak. In January when the Australian Open was on, I confess, I was simultaneously on ELAN and checking the tennis scores on the internet while the Marra gang were taking ages to write to down a word or a sentence. Haha... poor things.

But, on the plus side it's great that they are so involved in the transcription process. It's great that they are using and developing Marra literacy skills and through this process, it makes the recordings and transcriptions so much more meaningful and useful because they've done it themselves. When I type it up nicely and give them a printed copy of the transcript, it's not a foreign object, it's their work. 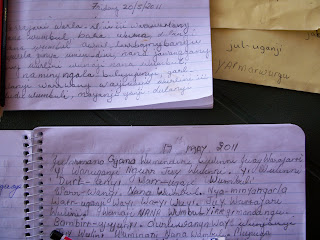 A lot is made of the notion of linguists giving back to the community, but what constitutes 'giving back' seems rarely to be defined or discussed. Another scenario of working through these old recordings would be that I sit in my office, transcribe and translate as much as I can on my own, mark the bits I'm not sure about and then go out bush with a list of questions that will allow me to fill in my knowledge gaps. Then I could 'give back' by presenting speakers with a CD and transcript of a Marra text. I would guess they'd like it and be happy with it and interested, but because their engagement with the process was somewhat limited, their engagement with the results would assumedly be equally limited.

I like to think that with 'slow fieldwork', the engagement with the process is maximised and so community development benefits are maximised (even though my patience at times suffers greatly, as does the speed of my workflow when deadline pressures are on the horizon). But by making the most of the process, I would argue that its easier to make more out of the product. Ultimately, it's my hope that what we're doing is a good way for a linguist like me to do 'giving back'.
Posted by nginarra 2 comments: