A few weeks ago, most of the people I work with started a Batchelor course (Batchelor is the college/university based in the NT specifically for Aboriginal people). The course they’re doing builds language work skills: reading and writing language, recording, teaching – all the same stuff we do here anyway. But I encouraged these guys to do the course so they can get accreditation for the training they’re already doing.

And so a lecturer came out to get these guys started and we’re continuing meeting twice a week for tutoring sessions to get through the course.

Yesterday morning only three of the students came but we got some good work done. They practiced using the minidisc to play recordings and then make their own. I helped make sure GB was doing it right and then off they went, all recording each other in Marra saying the bush tucker names they’d written down the day before.

After that, we listened to the recordings and then transcribed FR’s recording. Well, I shouldn’t say we. GB did it all on the board, I only had to help a couple of times – the other old ladies were helping him too. This is the short text that FR recorded on minidisc and GB transcribed:

The only words GB needed help spelling were 'warr-iwiganji', 'jinggulili' and 'jabay'. We didn’t even translate it, which I love – a Marra text standing on its own.

But for those who don’t understand Marra (hehe), here’s a rough translation:

Oh, and there's pictures of blanggangga and gulinja already on this blog... try look at Feb or March postings...
Posted by nginarra 2 comments: 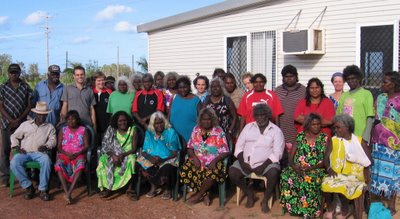 I've already blogged about the workshop we had at Numbulwar a few weeks ago (see below) and now here's a photo of everyone at the workshop. Biggest mob, hey? (And I've already sent it round with a press release... hehe...)
Posted by nginarra No comments:

To put it very simply, my job involves revitalising as many as 7 endangered languages, which is … well … pretty huge. And it’s a job that can only be done in baby steps. And sometimes I see some of the baby steps… and on one hand, they’re not much, but on the other hand, they represent something quite significant.

A few weeks ago, we put up some signs at the shop showing the names of eight animals in five different languages. This could easily be perceived as a fruitless activity – firstly, because hardly anyone is literate in their language and wouldn’t be able to read the words and secondly, the vast majority of people here seem pretty uninterested in their language. But four weeks on, two of the five signs are still sitting there at the shop and today I looked at the Ngandi one and someone had graffitied ‘Thompson’ at the bottom of it, which is the surname of the vast majority of Ngandi people here at Ngukurr. It’s only a little thing, but it means that that language, and the fact that it’s on display at the shop, is important to someone.

Last week, I went to Urapunga community for the first time in a year and a half. I didn’t do any language work there last year because they had no funding and I had no time. It was a shame, especially because there a few ladies there that are really keen. The language there is Ngalakgan and those ladies know a few words but there are no full speakers left there to teach them more. But they are keen to teach what they know and to learn more. So I finally went back there and had a meeting with them and the school. They are dead keen. The ‘baby step’ that really surprised me was when one of the ladies produced from her pocket a dirty folded piece of paper. It was a short Ngalakgan wordlist I’d written for her 18 months ago. If you know anything about communities, you would know that for something to last 18 months is pretty significant. I couldn’t believe she was carrying around that same bit of paper.

Today during language class, I sat with the Ritharrngu and Waagilak kids for a bit. They were learning those animal names. If they got it wrong, their teacher BW would say yaka (nothing, no). Then I heard a little boy, FH, all of 8 years old, pipe up with yaka, bayangu (nothing, no in two different yolngu dialects).

Earlier I was there when the assistant principal sat with the Ngandi kids briefly. One of the little girls (all of 7 years old) taught her how to say a-walpburrunggu (bustard, or bust turkey). Keep in mind that this language Ngandi is basically never spoken anymore, yet here was a 7 year old girl teaching her assistant principal a Ngandi word.

Baby steps. But then people are always excited to see a baby learning to walk.
Posted by nginarra 1 comment:

We've had two big weeks and today is the first day I've had to relax (and try and make sure I don't get sick from too much work... and play).

Last week, the Education department held a Language Revitalisation workshop. It was at Numbulwar, a community about three hours away which is actually on the saltwater giving it a stunning location. The workshop was pretty mega. The Ngukurr contingent totalled 13. Go us. Monday was our travel day and we waited and waited for the troopy to arrive from Katherine (carrying another 8 people headed for the workshop). Finally at 4pm they arrived. By then I'd already recorded old F saying a few words in Marra and then adapted our little computer game into Marra. And five of the men were long gone as they were travelling by plane. We set off before 5pm so it turned dark on the way. A few pauses and some water in the fuel line was nothing compared to the troopy getting bogged not far from Numbulwar. Our little Hilux had to act as the anchor for the winch and luckily we dragged them out as opposed to being dragged into the mud too. Ah, the joys of top end travel.

Anyways, the workshop was good. We checked out the deadly Language program at Numbulwar school. They've been teaching daily for 16 years and really have it together and it's a great model for us to follow. Again, I was pretty proud of the Ngukurr mob who participated well in the workshop and are beginning to impress a few ppl in the Education Department. The NT minister for Education, Syd Stirling dropped in and we got to show off and lobby him for some decent funding.

What I loved about the week at Numbulwar was that I got to be 'one of the guys' much more than usual. I was just one of the workshop participants along with the rest of the Ngukurr mob and I was camping on swags with the rest of the guys down at the 'billabong anga' (billabong camp). I just felt that little bit more accepted and apart of these guys life which makes being here that much easier.

The other funny thing that happened that week was seeing the Numbulwar kids react to me speaking Kriol. I was a total freakshow I tell you! It one stage I was surrounded by kids who were really putting me on stage and testing me out... I was no longer a person, but just this weird whitefella who sounds just like everyone else (except for other whitefellas). Too funny.

After Numbulwar I ran off to Darwin for the weekend for some R'n'R which was great but again, not all that restful. I needed to be back here for first thing Monday as we had a lecturer here from Batchelor college who is putting a lot of our language workers through courses. So this week, we had a weeklong workshop (interrupted only by running the school program) and it went well. The guys I work with have already picked up most of the skills needed to get them through the course so it's just a matter of some practise and assessment and we'll have a whole bunch of graduates on our hands.

So it's been a big couple of weeks and things just keep on building here at Ngukurr. I just have to make sure I look after myself. My glands are swollen and I'm on the verge of getting sick.
Posted by nginarra 1 comment: