I've withdrawn my recent post about the Katherine AFL Grand Final. In writing the post, it wasn't my intention to offend anyone or inflame tensions. It seems apparent that my post did so I apologise.
Posted by nginarra 1 comment:

Government report on Indigenous languages is out!

I've done quite a few posts here about the national inquiry into Indigenous languages that's been going on for about a year. See here and here, for example.

I'm very excited to say that the final report came out today and it's really good. I was very lucky to receive a preview copy of it last Friday because of my association with the language blog on Crikey. It was a media embargoed copy of the report and I wasn't allowed to disclose its contents until it became public today. (I'm so ready for CSI: Ngukurr... ha!). But getting the preview copy allowed me to write up a piece for Crikey which can be found here (thanks go to Claire, Aidan and others from Fully (sic) and Crikey eds for making my piece much better than it was going to be).

It's been an exciting day. Personally, I was pleased to see my article published on Crikey and that it seems to be pretty well received and read. But that's just my own little smugness. Generally, I'm really excited about the government report and what it might mean for Aboriginal languages and Aboriginal people and the many many people I know who, like me, battle away on working on these languages.

It could mean that organisations like the Ngukurr Language Centre will be better resourced. It could mean the return of proper resourced bilingual education in remote schools. It could simply mean that Aboriginal languages are better and more widely recognised and that I won't have to do so much hard work advocating for why it's worthwhile paying attention to them in the first place!

I'll be keeping track of the media and commentary that the report gets over coming days and weeks. In the meantime, here are some links to other media stories about the report that came out today:

What's in a word: barra

My PhD research concentrates on Marra and Kriol - Marra an endangered traditional language and Kriol, a creole language that has usurped it along with many other languages in this part of the world.

Personally, I find both languages fascinating. The idea that Kriol is somehow inferior or should be viewed upon negatively doesn't wash with me. Although I do recognise that Marra has more prestige for many. Kriol is amazingly interesting, dynamic and complex and I've learned that it has a richer vocabulary than any other linguist has previously described. At the same time, I love learning Marra and working with the last few old ladies who speak it. We've spent hours and hours making and listening to recordings and transcribing and translating them and I've loved pretty much every minute of it.

When translating recordings with the old ladies, I'm often amazed at how neatly Marra translates into Kriol most of time. Some of the Kriol translations are so compatible with Marra that it looks like Marra falling out of use is no great loss in terms of how you can describe the world around you. But then along comes a Marra word, saying or sentence that makes me go, "Damn, okay. You got me there. Kriol speakers would no way be able to talk about that in the same way, or maybe even know what you're talking about."

A recent example of that is when we came across the word barra in an old recording (a wonderful 52 year old recording for that matter!). Initially, I thought the word was barda - a common word meaning 'after' or 'later'. But old BR and FR said it meant 'wind'. But I know the Marra word for 'wind': walulu. Someone's confused - the smarty-britches PhD student or the elderly ladies? 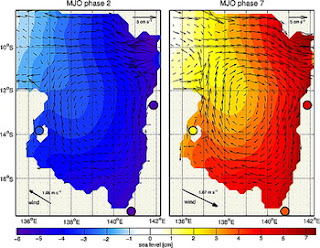 BR and FR explained further: barra is a specific wind - a westerly wind. I had no idea this word existed in Marra. There's certainly no equivalent of it in Kriol. What a neat word! I was impressed.

See, in English we can describe different kinds of wind, and some are very specific: sea breeze, northerlies, westerlies, headwind, trade wind, gale, etc. But there's a key difference. English words for specific winds are more often than not compound words. They have a root - breeze, wind, north - which is modified or added to to create the word:

(Note: words like gale and breeze are exceptions but they describe the strength of the wind, not the direction like the Marra word barra does.)

The word barra is special because it is monomorphemic - a unique, stand alone word. It doesn't have a root part and a modifying part like the English words do. The word barra has nothing to do with the generic Marra word for 'wind' (walulu) or a Marra direction term (warrgarliyana means 'from the west' and nguwirri means 'to the east'). To put it simply, the Marra language places enough importance on this type of wind that it gets its own word, unrelated to any other Marra words. Kriol and English don't do this.

Is there a reason why this would be so? Perhaps. Heath's Marra grammar has barra in the dictionary and includes some encyclopedic information in the defintion:

So it can be argued that there's a sound cultural reason that this westerly or north-westerly wind has its own unique name in Marra. It's associated with dugong hunting traditions. But these traditions have changed or diminished. There's no dugong hunting in Ngukurr because it's too far inland/upriver so maybe Kriol speakers at Ngukurr don't have a reason to pay attention to this wind in the same way that Marra dugong hunters would have done. And as a result Kriol doesn't have a special word and has lost some eloquence because of it.

Then again, it's not as though you can't describe this wind just because your language doesn't have a special word for it. Kriol speakers and English speakers can describe this sort of wind if they want - sangudanwei win? westerly? When the word barra finally fades from living memory, what's been lost? A unique meaning? A cultural reference? Or just a rather eloquent word that other languages describe in a more clumsy way? I don't know the answer. If you have any thoughts, please share.

This is the big question of my thesis - what's lost when a language disappears. I'm finding it a hard question to answer.
---
Heath, J. 1981. Basic materials in Mara: grammar, texts and dictionary. Pacific Linguistics: Canberra.