I mentioned in the last entry that lots of kids from Hodgson Downs had gone to a nearby community for a big festival. Well, the community is called Barunga and is home to the ‘Barunga Sports and Cultural Festival’. I spent the weekend there and had a good time. People went there from all over… heaps of people from communities all over the region, people from Katherine, lots of tourists… it really is one giant get together. It’s fun for me seeing people I know from Ngukurr or Hodgson Downs in a different place, especially when they’re happy and having fun.

The Barunga festival has lotsa sport. The girls’ big sport is the basketball (the Ngukurr girls won) and the boys are all involved in the footy carnival. I watched keenly as the Ngurralindji Tigers (from Hodgson Downs) competed but sadly were wiped off the field by the home team. Poor things.

At sunset, on both days I was there, the Red Flag dancers from Numbulwar performed. They are so good. They perform traditional dances about when the Macassan people from Sulawesi used to sail into Nunggubuyu country in the Gulf of Carpentaria. The dances are about their boats and sailing and other stuff… I don’t really know, but I know they’re fantastic to watch.

After sunset on both nights, the music kicks in. Saturday night was for the up and coming bands – a real mixed bag – but Sunday night was for the big guns. Yugul band from Ngukurr played (a band that’s been around for decades, released a CD last year and has toured the country) but the best band was Yilila. They are sensational. They’re basically the same mob that do the Red Flag dances, but they’re a noisy rock’n’roll band that have maintained but adapted the traditional songs and stories of the Red Flag into a noisy and spectacular show. They’re so good. They’ve just released a CD and will have a DVD coming out soon. They’ve performed at Womadelaide and the dancers have performed everywhere. They’re so good! hehe… everyone was up dancing and having a great time. And it’s so good to see community mob going off to other community mob.

Anyway, Barunga festival was good. No grog too, so the atmosphere was good. And, I bought a digital camera on the way there so hopefully as you read this you can look at some pics too! yay!
Posted by nginarra 1 comment: 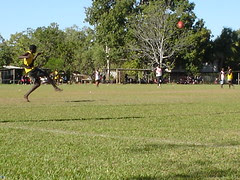 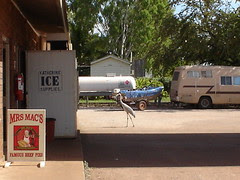 Brolga at Mataranka Shell
Originally uploaded by bump77.
On the way back from Barunga we pulled up at the Shell servo at Mataranka and there was this brolga hanging out in the driveway, unfazed.
Posted by nginarra No comments:

Bigibigi on the footy field 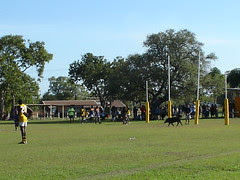 Bigibigi on the footy field
Originally uploaded by bump77.
While the Tigers were playing the Crows, a pig ran on to the field. Haha. Stupid pig.
Posted by nginarra No comments: 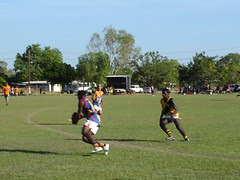 Ngurralindji Tigers v Arnhem Crows
Originally uploaded by bump77.
At Barunga Festival. The Tigers are in yellow and black of course. They lost.
Posted by nginarra No comments: 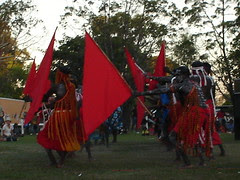 I’ve had a big and interesting week. The biggest thing that happened was that S arrived to take over my post at Ngukurr Language Centre for the next three months. That means that time is swiftly approaching for me to be out of here, have my holiday and re-enter white society for a while.

It’s been good having S here. It’s kinda re-invigorated me a bit. Having S take over also means that I can have my holiday with a clear conscience. There’s no way I could easily leave this place if it meant everything I’ve been doing this year was about to fall over.

We had a good week at work. The Ngukurr language program went really well this week. We had all 5 languages going and we had a bunch of new people join in this time. One guy in particular was rather enthusiastic about getting involved in the language program which was lovely. I call him brother and he’s only about 35 or so. He’s a Ritharrngu speaker and it’s just so good to have young people keen to teach their language.

S and me also scooted off to Hodgson Downs for Alawa classes at the end of the week. There were hardly any kids there because they’d all gone off to a big festival at another community. (I’d like to say ‘at a community nearby’, but the community is still a good 230kms away). Classes went really well though because we seemed to be left with some of the best students and they actually listened, participated, learned and wanted to learn. how nice!

Oh, one other thing we did at work this week was start testing the kids at Ngukurr to see if they’ve learned anything. I really enjoyed doing testing, partly cuz I’m a dork and partly because it was good to see the language centre mob learning about assessing kids and good to see kids realising what they know (or how little they know and that they need to try harder). Doing this testing is all part of trying to get this language program taken seriously so that we can get some stinking funding.

Well, I’ve only got a few days left here at Ngukurr and a list of jobs as long as my arm. I’m looking forward to having a break and a holiday and escaping humbug for a while, but I know that as soon as I’m gone I’m going to start missing this place and the people like crazy. Bobala mi!
Posted by nginarra 1 comment:

this week you could feel the season change. It's proper dry season now. It's cold now and you feel the air is just dry. It's had some kind of effect on me and everyone else too... most people I work with feel a bit sick or off colour and everyone is lacking energy and motivation. It's weird.

so yeah, i've been a bit sick this week. The dumbuyumbu i had might've helped a bit, but not a lot. And I later found out that I made it way too strong and that's why it tasted so gross! haha... stupid munanga.

This week was actually my last week in Ngukurr going solo. My contract finishes up in a month and I'm not coming back just yet. I need a good break from here. And I don't have to worry because I've got a good replacement coming next week. Her name is S and she's the one I took over from last October, so she already knows all about this job. She's had a good break now and is ready to come back. She comes next week and then we'll work together here at Ngukurr for a couple of weeks and then I'll leave her to it. After that, I'll still have a few weeks of work at Hodgson Downs and in Katherine and then holidays.

But it feels so weird that this week is my last on my own at Ngukurr Language Centre (on my own as in the only munanga). I've spent all year trying to get used to being here and now I have to get used to not being here! I'm gonna get sad too. I already had a bit of a soppy moment thinking about my wawa A. He's been so nice to me and taught me lots and has had such a positive effect on my time at Ngukurr. I'm pretty sure it'll be the case that although some people here can drive me nuts, as soon as I'm away from them I'll miss them like crazy and think the world of them.

Work has been slack this week. Like I said, we're all feeling unmotivated. We still had language classes at Ngukurr school, but only three out of five langauges were running. Most of the secondary students were away anyway because there's ceremony on at Numbulwar, a community three hours up the road.

Well, that's all my thoughts for now. I don't what's gonna happen in the next few weeks. I'll be going through a lot of changes... but I'll easing down and working up to giving myself a well-earned holiday.
Posted by nginarra No comments: