Today's trivia! Or, will anyone care about my PhD research?

Somehow I dug myself out of a mini PhD-writing slump this week and finally tabulated the last results of some research I did at Ngukurr a couple of months ago where I interviewed 14 young Kriol speakers about bush medicine and also a bit about lizards.

The people I interviewed taught me lots of interesting stuff, but analysing what they told me is doing my head in. I've basically been writing about the same stuff for six months and I'm sick of it. I'm sick of my thesis in general. I mean, I'm still *kind of* interested in what I'm doing and learning but I'm at the stage where I've flogged the topics I'm focusing on to death so much so that I barely care anymore and I just can't see how anyone else might care. (Yes, I'm at *that* stage. It's known as the Valley Of Shit).

But here's your chance to restore some faith that what I'm devoting all my time to might actually interest someone. A trivia question! Part of my thesis discusses the taxonomic knowledge of lizards that Marra speakers have and compares that with what Kriol speakers know, and I've just finished analysing data that ranks the 10 most salient types of lizard to young Kriol speakers in Ngukurr. So can you guess:


Q: What is the most salient type of lizard among young Kriol speaking people in Ngukurr? (based on a survey of 14 people aged 22-35)

So please: have a go at answering in the comments. If you don't, I will cry. The first correct answer will restore a skerrick of faith that my PhD thesis won't be a total waste of time/piece of crap! And I'll shout you a drink when I see you next!
Posted by nginarra 17 comments:

ALNF update: my panic attack wasn't for nothing

I recently wrote a detailed post that was critical of the Australian Literacy and Numeracy Foundation's use of a statistic that falsely claimed that 80% of Indigenous kids in remote communities can't read. It was a post that had been festering in my mind for six months and I was so relieved to finally get my gripes off my chest. But writing that blogpost was just the start.

Initially, I wasn't confident about publishing it on Fully (sic) but after running it by a few people I decided to publish a version there too, knowing it would get a lot more readers and attention. So it went up on Crikey and I immediately noticed it getting read, Facebooked and tweeted, including by reasonably well-known people like Helen Razer and economist Rory Robertson. I got some good feedback - in particular I was totally chuffed to get a personal email from one of the country's top Indigenous academics thanking me for the piece(!) - but I got a few negative comments too. The attention didn't make me feel good at all. I actually became really quite anxious, partly because it recalled two bad experiences I had last year when online articles I wrote got negative attention (including a random bullying phone call) which was really not nice. Online, I can be outspoken and opinionated but in real life I'm actually not very assertive so knowing lots of people were reading my criticisms of the ALNF was tricky to handle. Then, my anxiety hit a whole nother level when I saw that Mary-Ruth Mendel, the Founder and Chair of the ALNF, had responded to my post! Reading her comments, I felt pretty rotten that I'd upset her (but the fact that she called me Mr. Wilson kind of alleviated some of those bad feelings). After I pulled myself together, I responded to her, standing by what I'd originally written. It was a pretty crazy and worrying few days for me. 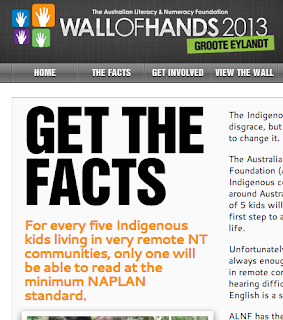 But I'm not wanting to just boast about how much attention my article got. I'm writing this to boast because it looks like my piece has actually caused the ALNF to adjust their marketing strategy and their use of that statistic! I looked at their Wall Of Hands website today and gone is the image with "Only 1 in 5 remote Indigenous kids can read" plastered over it. And on the Facts page, they have changed the way they present the statistic so that it's much fairer and accurate (pictured right). It's heartening to see and I'm actually kind of impressed that they've made this adjustment following my pretty harsh criticism. Kudos to them.

You know, I started blogging really quite innocently eight years ago mostly because I was too slack to send individual emails to friends and family while working at Ngukurr. I realise that I'm not Mia Freedman or anything and I realise that by the ALNF altering their marketing strategy doesn't actually mean I've done anything to reduce Indigenous disadvantage but maybe my blogpost has made a few people think about things they hadn't thought about before and that's nice. It really does surprise me that my little blogposts - which really haven't changed much over the years - sometimes find a decent audience and occasionally carry some weight and influence.

Oh! And the most remarkable thing the ALNF have done because of my article? Six months after they blocked me on Twitter, they unblocked me! Ha!
Posted by nginarra 2 comments:

Email ThisBlogThis!Share to TwitterShare to FacebookShare to Pinterest
Labels: blogging, the ALNF

I'm not too far away from finishing my PhD (I hope!) and my plan for afterwards is to come back to Katherine and see what comes my way. I'm pretty confident that I'll find interesting work that utilises my skills and experience like the other day when I was asked to help Djilpin Arts with a Kriol translation of a picture book they're creating.

It was only a little job, but very interesting for me because I had to translate it into Beswick Kriol, rather than Roper Kriol which I'm much more familiar with. There was a surprising number of little adjustments I had to make to ensure the translation sounded okay to a Beswick audience and Evangeline at Djilpin Arts was invaluable in providing assistance.

There were a few things I already knew to avoid - for instance, Beswick mob say idim instead of dagat for 'eat', they say deya instead of ja for 'there' and my favourite - they say eberrijing instead of enijing for 'things/belongings'.

But there was plenty I didn't know. I thought some of these Roper words might make the cut but they were all out: warajarra for 'floodwater', munyurrumap for 'grind/refine', bal for 'pound', maj or muny for 'curse'. The word for 'curse' (verb) was a new one for me - Beswick mob apparently say wunymang. Who knew?! Other substrate-derived words I had to include were moyi (green plum) and jotmo (a plant/bush medicine called guyiya or dogbul in Ngukurr). Yarlbun, which is the ubiquitous word for lilyseed in Roper Kriol was also out, replaced by datam.

It was really interesting to learn just how much variation there was between the Kriol I know and the Kriol spoken by those only a few communities away from Ngukurr. If I do go on to do more academic research after my PhD, I want to do a proper study of dialectal variation in Kriol, something that's never really been systematically studied before. In the meantime, the translation I worked on will go into a picture book called River Boy that will be released at the upcoming Walking With Spirits festival and it'll feature a Rembarrnga version of the text too apparently. Good stuff.

The highlight of doing this job however was getting this sign from Djilpin Arts, in return for my work (as well as a bit of cash): 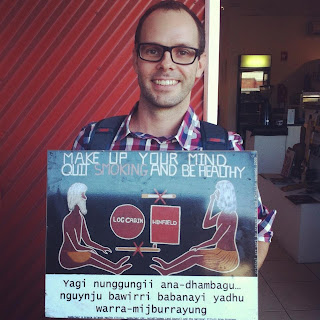 It's a bilingual anti-smoking sign in English and Nunggubuyu and I love it. Someone had found it at the Numbulwar tip and gave it to them a couple of months ago. Djilpin kept it because they liked how it looked but I don't think appreciated the language part as much as me. So I figured it deserved to go to a better home where it could be fully appreciated. Ha! I'm going to donate it to the Ngukurr Language Centre anyway. :-)
Posted by nginarra 1 comment: