The high rate of language loss and endangerment across the world is becoming more widely known. In the sociolinguistics course I am teaching, we discuss this as a follow on from topics such as multilingualism and looking at what happens when languages come into contact with each other. Sometimes you get stable multilingual societies. Sometimes pidgins and creoles arise. Sometimes you see code-switching phenomena. And sometimes, languages become weaker, become threatened, endangered and may cease to be spoken and known at all. (None of these are mutually exclusive, by the way).

When we consider language loss, we talk about why we should care (and whether we should care it all). When I asked students to think of reasons to care, the more immediate responses seem to relate to knowledge systems: that each language represents something valuable to humanity in terms of knowledge systems encoded in that language, and that that knowledge is of great value to the speech community too.

This comes through in the lovely quote I shared in class from Nick Evans' awesome book Dying Words:

“No-one’s mind will again travel the thought-paths that its ancestral speakers once blazed. No-one will hear its sounds again except from a recording, and no-one can go back to check a translation, or ask a new question about how the language works.

Each language has a different story to tell us. … for certain riddles of humanity, just one language holds the key.” (Evans 2010; xviii)

For lingusitics students, I think it's also important to share Krauss' well-known quote, that is directed internally at linguists and the field we belong to. It's not something that I think has occurred to students before:


“We [linguistics] must do some serious rethinking of our priorities, lest linguistics go down in history as the only science that presided obliviously over the disappearance of 90% of the very field to which it is dedicated” (Krauss 1992: 10)

But another aspect to why we should care about language loss is a little harder to convey: the personal feelings of loss and even grief that individuals can feel when they do not speak the language of their own heritage. It's really not very typical for us to talk about feelings in a linguistics class, despite their centrality.

Enter Australian singer and musician Mojo Juju. Only a few months ago, she released a song (and great video) called "Native Tongue".


Through her music and lyrics, you get a powerful sense of the personal impacts that not knowing the languages of your heritage (in her case, Wiradjuri and Filipino) can have: difficulties in finding a sense of belonging that others take for granted; anger at that not being understood ("It's easy enough for you to say, it ain't no thing. But I'm the one, you ain't the one, living in this skin"); and the resilience required to stake your place in society. The anger and hurt related to those feelings are also conveyed by her tone and music, not just the lyrics.

It's the first time I've seen issues of language loss represented in popular music. And Mojo Juju has captured it stunningly with a powerful track and video.

Also on this blog in "Sociolinguistic concepts through popular culture"

Fet footish: a spoonerism caught in the wild (thanks Gogglebox!)

Spoonerisms are awesome linguistic anomalies. It's a speech error you make when you accidentally swap two sounds around in words that are next to or near each other and end up saying words that make zero sense (or maybe the sound-swap results in words that actually still make sense but far from the intended meaning).

Some examples? When I searched online for examples of spoonerisms, they were mostly examples where the sound-swap resulted in a sentence that still made sense but resulted in an unintended meaning or examples that were curated artificially. Not much looked like spoonerisms that were genuine speech errors.

We'd all be familiar with spoonerisms and can probably remember hearing them or recall one slipping out of our own mouths. But, in my experience at least, they're rare. Maybe once I year I'd remember hearing one... maybe every couple of years I'd remember doing one accidentally? Would it be about the same for you?

The apparent rarity of genuine spoonerisms is why I love this short Gogglebox clip featuring Angie and Yvie so much. I've publicly espoused my love of Gogglebox as linguistic data quite a few times, and this clip adds a new element to that. A spoonerism caught in the wild! Check it out:


You can also click through to original 35 sec video


It is just so great to see the sequence of events unfold in the clip: 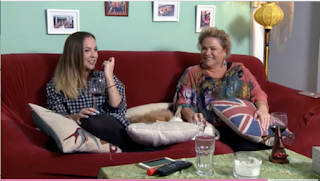 So yeah, a spoonerism caught in the wild. I absolutely love it, and I'm pretty sure it's quite rare: a fantastic beast but where to find it... Gogglebox, that's where!


Posted by nginarra No comments: