What's in a word: dinggal

Fun fact: In Kriol, dinggal is a verb meaning 'limp' or 'walk unevenly'. In Marra and Warndarrang, dinggarl-dinggarl refers to a weed that produces fruit like this: 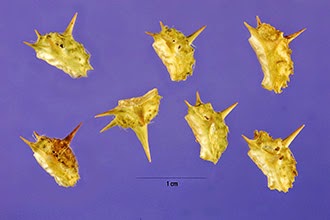 I only just noticed it yesterday when I was trying to suss out where the verb dinggal comes from (obviously not English). You can see the verb dinggal described (at 1:10) in this video (courtesy of the ever helpful and brilliant Kamahl and Dwayne):

As for those spiky little spurs? They're found across a lot of Australia, not only on on the ground, but embedded in thongs, feet and tyres, all over remote Australia. According to Heath's Warndarrang and Marra dictionaries, the species name is Tribulus cistoides. I'm not sure but it might be the nasty weed known as caltrop (can anyone confirm this?). Obviously, treading on those awful bindi-eyes will make you limp and walk strangely. The link between the plant name in Marra and Wandarrang and the verb shown on the video above is pretty obvious.

But there's more the story of the etymology of dinggal. See, it seems quite unlikely for a noun to switch over and become a verb when it transfers into a new language. Most other Kriol verbs that come from a traditional languages were verbs in the original language. It seems to be the norm that word classes stay the same. And when I scouted around, I did find examples of dinggal as a verb in other languages:

But the clues don't end there. Up in Central Arnhem Land where Ngandi country is, they say gu-dheng for foot (gu- is just a noun class marker - the bit that really means foot is dheng). When Ngandi people make verbs, they can do something that Marra, Alawa and Warndarrang people can't in their languages which is to insert a noun in the middle of the verb (this is known as "noun incorporation" to smarty-bum linguists).

Ngandi has a verb root -galiyn- meaning 'to hang up, suspend'. And when the word for foot gets incorporated into that verb, a new verb is created: -dhingh-galiyn- which Heath defined as 'to have or put one's foot on top'. This verb is now reminiscent of the Kriol meaning of dinggal too. And when we get rid of the Ngandi sounds that you don't get in Kriol (like the 'dh' and the glottal stop 'h') then -dhingh-galiyn- ends up as '-dinggaliny-'. Drop the -iny and you have a match with Kriol verb.

And that's what I've learned (so far) about the possible origins of the Kriol verb dinggal. (And... bragging rights: it's not even in the Kriol Dikshenri so I might be the first person to document dinggal as a Kriol verb at all!)

But was it a verb or a plant name first? And in which language? Maybe the Ngandi verb was first and it became the Marra and Warndarrang name for the weed. Or did the plant name come first? Or was it just a coincidence that the Ngandi word for foot created a verb that was reminiscent of words in Marra, Alawa and Warndarrang and then they all reinforced each other and then when Kriol developed, hey presto, let's keep using the word dinggal?

Who knows? I don't. Happy to hear your theories and speculations though!

By the way, this is stuff I've been writing in my thesis which is neeeeaaaaarrrrrrllllly done - still a few months away but getting close now. If you found this interesting, you can read about a stack of other examples when my thesis is finally completed.