I wrote a post a while back about a little boy thinking I was speaking French when I was actually speaking Kriol. Well, I'm pleased to say, I speak French now!

I recorded old MT telling a story about one of her paintings the other day: 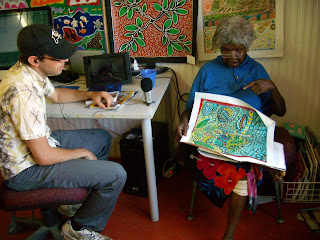 The painting is actually a gift for a French volunteer who has been working at the Art Centre here at Ngukurr for a few months.  So, after working with the recording in the usual way by transcribing MT's Marra and adding a Kriol translation (thanks to FR), I also added an English translation which was then translated into French!

So, for the first time, I now have a Marra recording translated into French. Maybe it's a world first!

Here's an extract of what MT told us (and yes, the French sounds clumsy sometimes because it's a fairly literal translation):

Oh, and it's a good story too. It's about a type of snake called rambaramba that likes milk and as such is known to be attracted to breast milk.  Unfortunately, it's also a prime example of what can be lost when you translate from a language like Marra into English or French. In Marra, the word for milk (including breast milk) and the word for breast is one and the same: gunyan. So when you say in Marra that 'the snake likes gunyan', you're simultaneously saying 'the snake likes milk', 'the snake likes breastmilk' and 'the snake like breasts'. And you can have a giggle about it. When you put it into English you have to choose one. I went with 'milk'. Much less fun. And then you have to do a bit more cognitive work to figure out that rambaramba likes chasing after breasts.

(This is an example why being able to express yourself in your mother tongue is convenient, valuable and important! *cough cough*... NT Department of Education... )
Posted by nginarra No comments: