George Orwell's 1984 was written in 1949. I first read it 12 years ago and am re-reading it now. One great thing about the science fiction genre is that by stepping outside the world we inhabit it lets you look at things from the outside and can offer clarity when you relate the fictional world back to your own.

Here's an except from 1984 that is quite striking:

"The Party taught that the proles were natural inferiors who must be kept in subjection, like animals, by the application of a few simple rules. In reality very little was known about the proles. It was not necessary to know much. ... They were born, they grew up in the gutters, they went to work at twelve, they passed through a brief blossoming-period of beauty and sexual desire, they married at twenty, they were middle-aged at thirty, they died, for the most part, at sixty. Heavy physical work, the care of home and children, petty quarrels with neighbours, films, football, beer, and above all, gambling, filled up the horizon of their minds. To keep them in control was not difficult. A few agents of the Thought Police moved always among them, spreading false rumours and marking down and eliminating the few individuals who were judged capable of becoming dangerous; but no attempt was made to indoctrinate them with the ideology of the Party. It was not desirable that the proles should have strong political feelings. All that was required of them was a primitive patriotism which could be appealed to whenever it was necessary to make them accept longer working hours or shorter rations. And even when they became discontented, as they sometimes did, their discontent led nowhere, because being without general ideas, they could only focus it on petty specific grievances. The larger evils invariably escaped their notice."

Let me digress and leave Arnhem Land for a post, while I go back to the place where my interest in language was first sparked - Iceland - where I was an exchange student after I finished highschool.

Now, Iceland has hit the news because it plans to start commercial whaling again, with a quota of 30 minke and 9 blue fin whales. The Australian government (my favourite thing in the world!!) responded with this criticism from Environment Minister Ian Campbell (thanks ABC News website):

"I think it will raise doubts right around the world about Iceland's commitment to environmental issues," he said.

"It is really a very sad day for the world, when a first world, developed country like Iceland should effectively tear up one of the great environmental achievements of the world from the last century, that is the moratorium on whaling."

Okay, so I'm not into whaling as much as the next guy, but for Australia to criticise Iceland is a big call. This from a country who refused to sign the Kyoto protocol and is taking no action to cut down greenhouse emissions, all the while Iceland is one of the world's cleanest countries with nearly all its power produced from geothermal energy. Countries like Iceland should be bagging out Australia, because they are doing the right thing in terms of the Greenhouse effect and we're the idiots stuffing it all up.

Pull your head in Senator Campbell.
Posted by nginarra 3 comments: 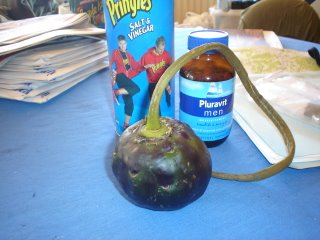 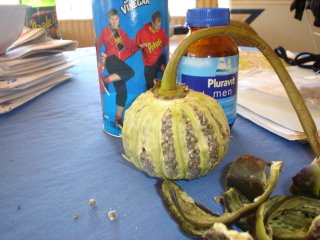 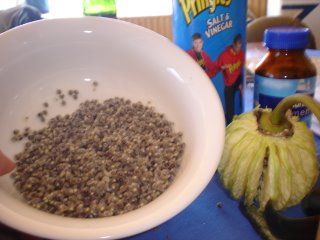 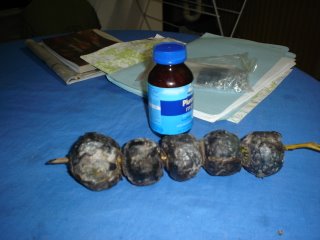 The other day old BR asked me to drop her down at the local billabong. This is just the kind of humbug that sometimes annoys me, but as a peace offering BR gave me the biggest yarlbun I've ever seen! (Which made it all okay.)

Yarlbun is the Marra name for this bush tucker - it's the fruit of the water lily, a big seed pod that you get by going into the water and feeling around for under the surface. And these pictures show you what you can do with it.

The first pic shows the giant yarlbun intact. Next, I've peeled the skin off, revealing the inside part bulging with lily seeds. Now, you can eat it just like that, like an apple, but as you'll see in the third picture, I've actually emptied all the seeds into a bowl. And that's how I ate it, just like cereal. Very tasty, and I'm sure very healthy. And the last pic shows a row of yarlbun that had been roasted on the fire - another good way to eat it.

And thus endeth your first lesson on bush tucker. Acknowledgements to old BR (and all the other people out here that have taught me about this kind of thing).

more about our cold-hearted government

Jane Simpson wrote some sad and sobering thoughts about what this government is doing to Aboriginal communities. Please have a read.

And please think about voting for a government that has a heart and a brain.
Posted by nginarra No comments:

a good but tired day

If I wasn’t so tired and in need of a good break, I would be really enthusiastic about my day today. Today was a really good day and most days we are still doing lots of good stuff, but I’m tired and am finding it hard to be inspired.

But can I tell you about today?

The first good thing that happened was a visit from Ted Egan, who is the administrator of the NT. (He’s is the Queen’s representative here, same as a governor, but only states have governors.) He’s been visiting Ngukurr for a couple of days and yesterday happened to be at the school when we were doing language classes. He was very impressed with what he saw (good job Marra mob!). He met the Marra teachers and asked if he could sit down with FR, our deadliest Marra speaker.

So this morning Ted Egan came to Language Centre, chatted to me and the language mob, then I went and found FR because Ted wanted to interview her and record some of her story. Ted’s idea is that old Aboriginal people like FR should be getting a lot more recognition nationally for their skills, knowledge and for what they represent. So me, Ted and Freda sat down and Ted asked her to tell a little bit of her story, speaking only in Marra.

It was only a short session, but it was great listening to FR busting out her Marra. (Only bad thing was my mobile going off in the middle of it.) We took some photos and we’ll work on the story, which Ted is hoping to use as a tool for people like FR to gain greater recognition.

After that, some of the language mob and me went to the Batchelor Centre to do a bit of work on their Batchelor course. For their course, they need to learn some basic computer skills, which I’ve been reluctant to do because the language mob’s computer skills are nil to poor. But they were keen to learn. With 4 students and 4 computers, we gave it a go and it worked great. ET and AG have basically never used a computer before and there they were booting up, typing words and sentences in their languages and printing them off. RG and JJ were also doing it but they already know a bit about computers. For me it was a magic moment sitting back watching them quietly working away on the computers.

After that JJ listened to the recording from this morning with FR and Ted Egan. He was playing it (using the minidisk capably on his own, good man) while I was deep in conversation with someone else. Then my phone went off again (my John Legend ringtone), so I apologised and dug in my pocket for my phone. I looked at my phone but was very confused because nobody was calling me! Then I realised it was coming from this morning’s recording being played on the other side of the room and I felt rather stupid. Oh well, it’s nice when everyone gets to laugh at me.
Posted by nginarra 2 comments: