Sociolinguistic concepts through popular culture, Part 1: drag queens and how 'no two speakers are identical'

I am currently teaching sociolinguistics. Most lectures, I have found ways to illustrate key points and concepts with short online videos - usually stuff from TV shows, YouTube and other things. It's an effort to co-opt things I already enjoy and am familiar with to make sociolinguistics and lectures fun. After all, "when all is said and done, we study sociolinguistics because it is fun" (Meyerhoff 2011: 4)

So, in the name of fun, I'd like to share the videos and corresponding sociolinguistic concepts I've been using in my lectures. Others might enjoy and learn from them too. Here's part one.

Key concept: Sociolinguistics is about individuals. No two speakers have the same language.

Concept in more detail: Societies consist of individuals, none of whom are exactly the same. We shouldn't forget this when we study sociolinguistics. In Hudson's introductory textbook, he says: 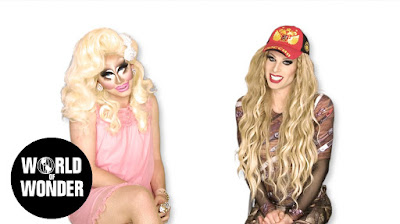 Trixie and Katya are both L1 American English speakers and both belong to American drag sub-culture. They appeared on the same series of RuPaul's Drag Race and now have a successful YouTube web series called "UNHhhh" (Caution - MANY adult themes! Audio is VERY not suitable for work. You could *maybe* get away with listening to it with headphones at work but it may still raise many eyebrows).

In UNHhhh, Trixie and Katya talk all kinds of rubbish (much of it absurdly hilarious and/or crude), loosely tied to a broad topic. When watching their videos, it is crystal clear that Trixie and Katya belong to the same speech community/community of practice. Far beyond simply speaking English the same way, they understand the same references that are understood not just by drag queens but, more specifically, by RuPaul Drag Race contestants. The first video below demonstrates this. They share references, get each others obscure jokes and finish each others sentences. The section to watch runs from 0:41 to 1:20 (that section is suitable for work, the rest isn't - timed link here):

In that excerpt, you hear them refer to Gia Gunn (a former RuPaul Drag Race contestant), mock her way of speaking, mock her career progression and, finally, utter 'you're welcome' in unison. Trixie and Katya appear to be two linguistic peas in a pod.

The second snippet from UNHhhh, however, shows how two linguistic peas in pods can still have a different experience of language, as per Hudson's idea above. In the second excerpt, a complete communication breakdown occurs over the term 'forensics'. They simply do not have the same understanding of the term. Katya is in disbelief at the semantics Trixie tries to convey, to the point where a third party has to intervene and the insult 'you dumb bitch!' is affectionately deployed. The section runs from 2:50 to 3:35 (timed link here):

And that is an example of how no two speakers have the same experience of language. I hope you enjoyed it one-tenth as much as I did doing the research and sourcing of data! :)