Here at Ngukurr, middle aged and older people all have stories about being banned from speaking Language at school. I don't hear the stories that often, but I know they're there. I don't push them because I worry they might be painful or make people feel no good.

But in the press release I sent around a few weeks ago, we approached the issue. Here's what I wrote (it was published in the Koori Mail):

"Older generations of Aboriginal people in the southern Arnhem Land community of Ngukurr were banned from speaking their traditional languages at school when they were children. Decades later, a dedicated group of the same people are putting their languages - now endangered - back into the classroom and teaching new generations.

Now in its second year in its current form, the language program at Ngukurr Community Education Centre incorportates five langauges - Marra, Ngandi, Ritharrngu/Waagilak, Rembarrnga and Nunggubuyu. Each of the 200 or so students learns one of their traditional languages through weekly classes run by teams of Elders and language teachers.

"It was hard when I was young because white people wouldn't let us speak our language in the class," says Ngukurr Langauge Centre chairman John Joshua. "We had to speak at home with our parents. Now we're lucky, we have a language centre and we hope to keep going while our Elders are alive, speaking their languages strongly. Kids are really enjoying our classes, especially the younger ones."

Through the language program, students at Ngukurr CEC not only learn their traditional languages but also strenghten their cultural identities. They gain valuable opportunities to learn from Elders and their languages are given a better chance of being passed on for future generations.

The current program was developed and implemented in 2005 without any funding from the Education Department, instead being supported entirely by Diwurruwurru-Jaru Aboriginal Corporation (Katherine Regional Aboriginal Language Centre) and its annexe at Ngukurr.

From the dedication shown by community members involved in the program, the local school was able to source funding to pay the language teachers."

And so today I cut out the article and stuck it up at the Language Centre. My anggul E, who's about 50 or 55, read it and said to me, "That's true."

He told me that one time, his teacher heard him speaking his language, Ngandi. His teacher took him into the store room, got a stick and belted him 15 times. After that, his teacher made him write lines. He had to write 50 times, "I must not speak Language at school." He reckons he was about 8 or 10 years old at the time and he remembers the name of that teacher.

When old E told me that story today, I nearly cried, but all I could say to him was, "That's no good, hey".

I felt silly putting meagre words to his story, which I think is just absolutely shameful and criminal.
Posted by nginarra 2 comments: 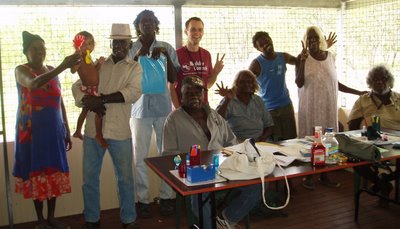 Believe it or not, but this motley crew is responsible for the revitalisation of Ngukurr's endangered languages. And they're deadly. Standing left to right are my mami (mother) R, baby M, and my wawa (brother) A, who are the Rembarrnga mob. Then there's my maari (mother's mother's brother) T, our Waagilak teacher, then me, then my nephew D, who works on Ngandi and my magarra (uncle's daughter) B, a Marra teacher. Sitting down are my anggul (uncle) E, our Ngandi teacher, my anti F, a Marra teacher, and JBJ, our chairperson. Thank you to my mami Sophie for the photo.
Posted by nginarra 1 comment:

I'm too vain to not be excited by being mentioned in any kind of media... and I'm doing okay at the moment.

You can see me on two blogs: bulanjdjan talking about the opening of the Community Language Library last night, and the other bulandjan talking about me dancing (performing more like) and the big disco at Ngukurr last weekend.

Apart from that, I was interviewed by ABC radio and the opening of the Language Library last night. I just went to air around the NT and might be on Radio National too now. And a press release I sent around about the Ngukurr School Language Program has got a response. The April 26 edition of the Koori Mail has a colour photo on page 2 and the story on page 28. But my name isn't mentioned on that one... so I can be a bit humble. :-)
Posted by nginarra 2 comments: