When Kriol signs go right - and when they go wrong

When I shared this Kriol sign on Facebook as an example of a bad Kriol translation, a first language Kriol speaker commented:

It’s not Kriol for goodness sake, otherwise I would’ve understood it.

My thoughts exactly. And also the thoughts of every other Kriol speaker I know who has seen it.

Poorly translated signage isn’t uncommon. Everyone is familiar with the hilarity of Engrish. But when translation is just a commercial novelty, it doesn’t matter too much. However, when government departments seek out translation services, you can assume that it is for an important reason. And when that goes wrong, it is more serious and more embarrassing. My favourite example of this is an English sign emailed off to be translated into Welsh. The resultant sign features an ‘Out Of Office’ auto-reply message in Welsh!


Kriol, as the most widely spoken language in the NT after English, is one of the main languages that people in the Top End seek out translation services for. There are a few examples of good Kriol signs around, such as this old one as you enter Barunga: 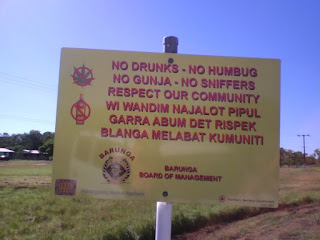 This one as you enter Minyerri: 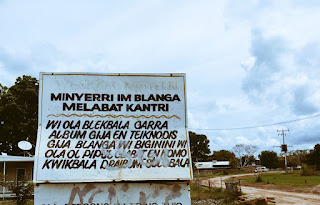 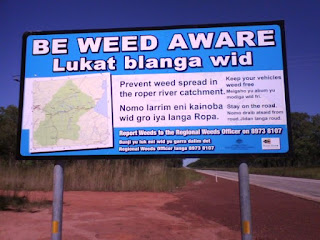 There are challenges to providing translation services in Kriol. Firstly, while Kriol has a standard spelling system - courtesy mostly of the Bible translation work - it is not widely known (and not taught in any schools). Secondly, Kriol does vary from place to place so spellings are often altered to reflect localised pronunciations. Thirdly, translation is not something that can be done by anyone who knows two languages. It is a professional skill that requires training and experience before it can be done well.

The Kriol signs above have been done very well. More commonly, I see Kriol signs that are good attempts but have a few things that I would probably fix up if I wanted to be really picky. But, given the challenges I mentioned above, leeway should always be given. Take for example, this sign at Ngukurr Pool, which I think is fantastic: 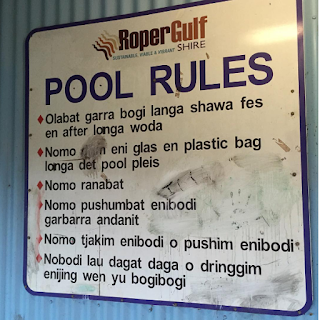 Notice on the sign that, while most of the words are in Kriol spelling, a couple aren’t, such as after. You can see that someone has made another correction themselves, trying to change longa (incorrect spelling) to langa (correct spelling). But these are minor issues. Overall, the sign makes sense and uses some excellent Kriol phrases (nomo pushumbat enibodi garbarra [sic] andanit – don’t push anyone’s head underwater) that you can’t help but like it.

But this sign, recently put up by, I believe, the Department of Primary Industries near Rapid Creek, is another kettle of (possibly toxic) fish. 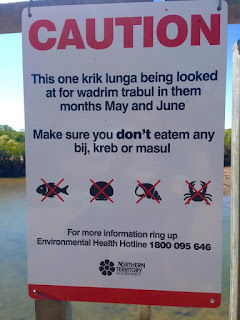 It doesn’t take a linguist to note the obvious spelling inconsistencies. Some words are spelled in Kriol such as krik (creek), kreb (crab) and masul (mussel). A few are Kriol-looking words with English spelling influences, like eatem (in Kriol spelling: idim) and lunga (meaning in/at/on/to, spelled langa as already mentioned). And the rest is in ordinary English spelling. Given the mixed up spelling systems used, an obvious question should be – what language is this sign supposed to be in?

But the bigger issue is that it actually doesn’t make sense. At least not to any Kriol speakers I know (and I know a lot).

Two phrases are particularly nonsensical. Wadrim trabul (presumably derived from ‘water-im trouble’) is not a thing that makes any sense to me and nothing I would ever say if I was on an interpreting job.

The weirder one is …lunga being looked at… This just makes no sense. La or langa (their ‘lunga’) is a preposition locating something in space, usually translating as in/at/on/to in English. So it translates to something like … ‘at being looked at’? Je suis confused. On top of that, the phrase ‘being looked at’ is not a structure you’d find in Kriol so I don’t know what it is doing there.

Sadly, despite the commendable gesture to provide signage in Kriol, this result is well below par. The apparent goal of the sign - to communicate a message in Kriol - has not been achieved.

When I first saw this sign being shared on Facebook, I immediately questioned its quality, as did others. All Kriol-speaking contacts – Indigenous and non-Indigenous – were equally confused by it (Numu gud wan dunja dat sign braja - "that's not a good sign, brother" - wrote a Kriol-speaking mate from Ngukurr in imperfectly spelled but perfectly understandable Kriol).

So, in an effort to actually be helpful, I called the number on the sign to let them know that their sign is poorly made. The response from the Department of Primary Industries was surprising. Despite my professional advice that it is poorly made, they are standing by it. They told me the translation was done by Aboriginal Broadcasting and placed importance on the fact that it was done by Aboriginal people. Whether they have produced a translation that is actually communicatively useful seems to be a secondary concern. I tried to point out some of the above – that the inconsistent spelling is a clue to it being a poor translation and that all Kriol speakers I know who have seen it find it poor – but it made no difference.

This is all a bit of an unfortunate shemozzle. It is disappointing that Aboriginal Broadcasting has apparently delivered poor quality language services and disappointing that the Department of Primary Industries were apparently not interested in addressing the poor work they had commissioned. 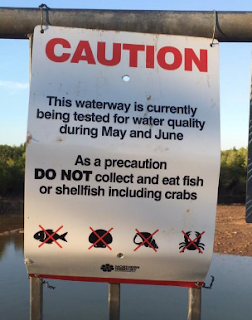 The message here is, find someone who has skills and experience in translation, not just someone who can take your money and do an efficient-but-ultimately-poor job. And yes, the provision of quality translation services in Aboriginal languages is difficult and may take longer than you expect, but if you try a bit harder, you can make it work.

Someone on Facebook posted the English version of the sign, and it took me about one minute to translate it into something that would make much more sense to all the Kriol speakers I know: