What to call January 26? 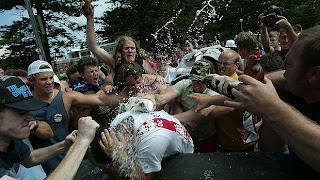 I'm sorry but I just can't stomach Australia Day. And not just for the obvious reason that it commemorates the day that British people claimed about 7.6 million square kilometres of Aboriginal land to be their own because a few blokes sailed into Sydney, made camp and stuck a flag in the ground.

For me, it's a day that will forever be tainted by the 2005 Cronulla Race riots. I don't think I've done anything to celebrate Australia Day ever since. It wasn't just the shocking images of the events on that day that disturbed me. What affected me more deeply was John Howard saying in response that he "does not accept that there is underlying racism in this country". What a display of leadership! (As well as being total BS).

So ever since, I've avoided celebrating Australia Day like the plague. Okay, some might say that makes me a party pooper and a bit full of myself. But I just can't.

But what I can do is find enjoyment in other ways. Last year, this awesome bit of standup comedy amused me no end. This year, I'm enjoying discovering alternative names for January 26:

And I just thought of a new version of that last one: today I asked a friend if he wanted to go for a drink this weekend. Being non-Anglo and having experienced plenty of racism in his time, his swift response was "I'm not going out this weekend". So a new alternative name for Jan 26 is:

What do you reckon? Do you like any of these alternatives or have you come across any other good-uns yourself?
Posted by nginarra 5 comments: