So the other day, I was dropping all the language mob home after we'd been at Ngukurr School teaching language for the afternoon, when 5 men in the back of the troopy, our Ritharrŋu and Wägilak teachers, very quickly raised their feet off the floor saying djatam! djatam!

And this is why: 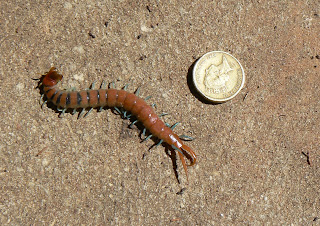 This week was a rough week, with another community meeting held by public servants from the Intervention. This time it was to tell the community about the changes to the CDEP program.

CDEP is an employment program subsidised by the Government. It is similar to work for the dole, but slightly different in that the wage is a little higher, it isn't compulsory, it is easy for employees to receive top-up wages or do work extra work and you actually have a supervisor and manager and can build training and employment pathways into your job. CDEP has been working really well here for the past year or more providing employment to over 120 people. More than just provide employment, it helps Ngukurr provide services that we wouldn't otherwise be able to fund. The areas that rely heavily on support from CDEP employment are: creche, art centre, language centre, aged care, mechanic's workshop, builder's workshop, garbage collection, swimming pool/sport'n'rec/after school care, ranger program and more.

And so part of the Intervention plan is the scrapping of CDEP. We knew this was happening, but on Wednesday a meeting was held to tell us more. The meeting was led by two public servants from 'down south' as part of the Intervention and another who is from the Katherine Region. The first woman, Philippa Hibbert, was from DEWR in Bendigo and told us about CDEP finishing and the three steps of what would happen from there.

Part way through her speech, she was interrupted by the council's CEO because the language she was using incomprehensible to - I would guess - all of the 100 or so Aboriginal people at the meeting. She was using terms such as 'the cessation of CDEP' and 'transitioning into income support'. Did she really believe people would understand her?

And so the CEO asked me if I would interpret for her and the crowd. So, I did and I think it helped but I wasn't happy that I had to do it for free when it's actually a very difficult job requiring a lot of knowledge and skill and should be properly organised and paid for, and done by someone who is properly qualified. But for the sake of facilitating proper communication, I gave it a go.

Anyway, she talked about moving off CDEP, about looking at the current activities funded by CDEP and then attempting to move funding into to the relevant department so they can turn CDEP positions into real jobs. For those who don't move into real jobs, the only option is a STEP employment program or simply moving onto Centrelink.

Then the Centrelink rep from the Gold Coast talked about Centrelink and I interpreted for her too. Centrelink will also change as there will be no longer be exemptions for people living in remote communities with little employment opportunities - everyone who is able to work will now have to look for work and/or work for their dole.

The mood from this meeting was very different from the first Intervention meeting. This mob felt like there was nothing they could say. The decisions had been made. Nobody saw any point in arguing or complaining because they felt it would be of no consequence. It was depressing and demoralising to hear that all CDEP jobs would be in jeopardy and that it is likely most people will have to go over to Centrelink.

For anyone who's been a Centrelink client, you would know how demoralising it can be dealing with them. Before the meeting I said to the DEWR woman, how can you possibly believe that it is a good thing to move people from CDEP into the Welfare System. Surely it's a backward step. She didn't have anything to say to that except feebly reiterating the government lines about creating real jobs.

To me, it seemed like this meeting really cracked people here. There was little fight, like there was at the first Intervention meeting. The deals have been done. Nobody here knows why this is being done to them. CDEP works well here and it's being taken away, even though many people have worked very hard for years. Had some positive options been presented, then great - good riddance CDEP - but the impression given was that the only option is Centrelink. Well, I think it just broke people's spirits.

After the community meeting, I attended a closed meeting with the local council - staff and council members. It was a good chance to get more detail on the changes. One thing I was interested in was the STEP program - one of the training/employment programs the government is talking up in the face of the 'cessation' of CDEP. I was thinking, okay, what's this STEP program, I've got to try and be positive and see what Language Centre can make of this situation. After a few questions, I was still trying to work out how to get a STEP program at language centre, until the Intervention people reluctantly admitted that there wasn't actually anyone in the Katherine Region delivering this program - it is still out to tender. Everyone's jaw dropped and the public servants were visibly embarrassed.

That afternoon and the next morning, everyone I work with here was asking me 'what's going to happen', 'what will happen to our jobs', 'where will we get money'. The concerns run deep and no one is happy with the government. We will wait and see, but the scepticism that anything good will come out of this is growing and growing.

A final point: at the closed meeting, I said that the end of CDEP is more than just an economic and employment concern, that socially it will have a massive impact. I spoke of how we see stories on the news of a factory closing in Geelong and they tell us of the significance of 500 jobs going in a city of 100 000. Whereas here we have a community of just over 1,000 finding out that 120 jobs - the bulk of the community's total employment - is now in jeopardy. Socially, the impact of that is huge.

Nobody will ever convince me that the government knows what they are doing and that this Intervention is a good thing.
Posted by nginarra 10 comments: