Here's a crazy scene: two guys outside a beachside shopping centre. One guy is harassing the other one for money. The guy being harassed announces he's a cop so the first guy gets spooked, runs off into the bush and subsequently strips off and goes into the water. He eventually gets caught and does what could only be described as the ultimate walk of shame: stark naked, trailing a cop, as you go off to be held in police custody.

Now, if you were someone who witnessed this scene, wouldn't it sound a bit odd to describe it like this:


"I was laughing to myself because it was the first time I have seen people naked."

Why say there were naked people, when there was only one? Why would an adult not have ever seen a person or people naked before, as the quote implies?

The answer lies in that the term people used here is a euphemism for Aboriginal person/people. What the above quote really means is "...it was the first time I have seen an Aboriginal person naked".  In this usage, 'people' is a euphemism resulting from political correctness and the anxiety that many non-Indigenous people feel regarding the way we refer to Aboriginal people. So even though the article that reported on this incident doesn't mention that they naked guy was Aboriginal, my forensic linguistic skills allow me to pretty confidently deduce that he was. (And no, not because I'm adhering to stereotypes of Aboriginal people that relate to high incarceration rates and their over-representation in the justice system).

It's not at all uncommon for non-Aboriginal people in the NT, who are (self)-conscious about how they talk about Aboriginal people, to use a generic word like 'people' in this odd way when they are actually referring specifically to Aboriginal people. I remember talking to a friend recently who said something like:

Which 'people' was she talking about? Why not just say 'we'? From the context of the conversation it was clear that what was really meant was 'they', as in "they (people in remote community X) don't like to work in the afternoon (they prefer to work in the morning)". But without context, the utterance sounds rather bizarre.

I would actually go further and suggest that this euphemistic use of 'people' is applied more specifically to Aboriginal people from remote communities - those that non-Indigenous people commonly see as inherently different or "the other". But political correctness dictates to liberal-minded non-Indigenous people that labels that focus on the "otherness" of others are to be avoided. Like how liberal-minded folk also often try to avoid the pronoun 'them' or 'they', fearing that it connotes 'us and them' discourses that are commonly associated with racist discourses. So, to get around these issues, a non-descript label like "people" is used. It's a way for us to talk collectively about Aboriginal people in remote communities when we don't want to be seen to be labelling or dichotomising and don't want to evoke racist discourses of 'us and them'.

Which is kind of a good thing I suppose. Except that we sometimes end up sounding dumb. As in the examples above.
Posted by nginarra 2 comments:

I spent last week in Ngukurr and it was great to be back. It’d been eight months since my last visit which is waaay too long. In addition to that, a lot of the time I spent there last year was dedicated to helping the Language Centre. But this trip I actually got to devote some time to doing proper language work again. My academic mission for the week was to find out about what young people know about bush medicine and how much they use it. But on a personal level I was just looking forward to going back, seeing everyone again and seeing the Language Centre in operation again. 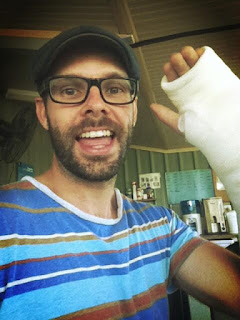 It was a great week with many highlights, despite my arm being in a cast due to a fractured hand (3rd metacarpal to be precise).

Highlights of the week included:

Seeing many many people from Ngukurr who I realise now, kind of for the first time, that I’ve known for a really long time. I was interviewing a guy who’s now 27 and it dawned on me that I’ve known him since he was 19! Kinda freaks me out that I’m seeing a whole generation grow up…

I did eight interviews with young people talking about bush medicine. I really enjoyed doing the interviews. I interviewed six guys and two women aged between 25 and 35. I learned more than a few things from them (details will be in my thesis!), demonstrating to me that it’s clear that many young people still use bush medicine and know a fair bit about it, although not as much as old people (predictably).

My visit coincided with jupi season – the time of year when a delicious small fruit called jupi in Kriol or in Marra: gumirr (scientific name: Antidesma ghaesembilla) is fruiting. At this time of year the fruit is plentiful and everyone gets very excited about collecting it and eating it. With only one arm and no vehicle, I didn’t get to join in the collecting fun but thankfully old Betty very kindly shared some of her bounty with the Language Centre. Twice! I ate so much one day that I skipped lunch and started to feel rather sick.

One of my bush medicine interviews evolved into a discussion of Kriol verbs that I’ve been studying, which in turn evolved into an impromptu videoing session where DR and KM described and acted out a selection of 11 non-English based Kriol verbs in a series of short videos. It was hilarious and a fantastic thing to do. KMs acting was great and DRs descriptions of the verbs were also great. I hope to edit the short clips together and get their approval to star on YouTube!

I got to help the Language Centre with a few things and it was nice to be a bit useful there too. But probably extra nice to know that my help wasn’t needed but rather just valuable (hopefully) which means that they are running fine without me.

I loved immersing myself in Kriol again after so long and trying our my rusty Marra a bit too. My new Kriol words for the week:

Mangala-mangala: which is when someone follows, or wants to follow the same course of action as someone else. E.g. when you’re eating your nicely cooked feed and the kids around you all want to eat it too. Or when you decide to go to Roper Bar store for shopping and suddenly everyone else wants to come along too. (Mangala-mangala is distinct from jal which means to copy or imitate, e.g. repeat what someone else said word-for-word).

Waranga: to be lost or lacking purpose or intent.

(Note: these are rough definitions only!)

But there were a few not-so-fun things too:

A few significant deaths happened while I was away (which I knew about but they don’t really feel real until I go back and see their families). Ngukurr is forever changed when elders pass away. It definitely isn’t the same without AJ Sr around. He was a great man and although I was never that close to him, he raised great kids and instilled so many strong and admirable values in those around him. Bless him. GH also passed away recently. She hadn’t lived in Ngukurr for years and was very elderly and suffering from dementia. But I knew her when she was still quite independent and living in Ngukurr. She was a lovely old lady and a brilliant artist – quite possibly my favourite Aboriginal artist in the world. And with her passing the indomitable force known as the Joshua sisters is down to just two.

Also not-so-fun: answering the question about my broken hand about, oh, I don’t know… 100 times! If anyone’s interested, here’s the prototypical adjacency pair in Kriol:

A: wani yu bin du la yu bingga? (what did you do to your hand)

B: ai bin buldan drangginwan. (I fell over when I was drunk)

I really don’t know if having an alcohol-related injury gives me more street cred or less!

It was also frustrating to have only one functioning hand (although I’m on sick leave so technically I don’t even have to work). But there were plus sides to being temporarily handicapped too. Such as when I was interviewing young people about bush medicine, they had to do all the operating of the digital recorder for me and monitor the audio while being recorded and I think this was a good thing. It kind of helped them to relax and have some kind of control over the process and made it a bit more engaging and collaborative, which was nice.

Overall it was a great week. And I'm extremely grateful to Salome for being a huge help with lifts, shoelace-tying, coffee-making and tying a plastic bag over my cast each night so I could shower. I'm also grateful to the people who let me interview and record them. I feel so privileged that I can basically turn up out of the blue after eight months and not only feel warmly greeted but be able to launch straight into doing interviews and language work with a bunch of different people. So yeah, thanks all! I'm looking forward to the next trip to Ngukurr already.
Posted by nginarra 3 comments: