How do I even explain how awesome, yet somehow unremarkable, last night was. Actually, I think it's unremarkable-ness is what made is so awesome...

Last night, I was treated to 90 minutes of basically a private show of the most stunning traditional songs (Manikay) sung by my three wäwa (brothers), DW, BW and RW, accompanied on yiḏaki (didj) by our uncle DW. The reason I got to experience this is because young DW asked me the other day, rather shyly, if I had a recorder because he wanted to record old RW singing some songs that he wanted to make sure he'd learn properly. I've known DW for years now and he is a bit younger than me but a really great traditional singer and has been touring with the Australian Art Orchestra for several years on the Crossing Roper Bar collaboration. I was more than happy to help and I'm glad I did.

It happened so organically - go and pick up DW, go see BW and RW. Go find the 'bambu man' (didj player). Sit down, warm up and away they went. They sung Djambarrpuyŋu Manikay about wind then followed with Wägilak Manikay about waṯa. I sat in the middle with my little recorder, surrounded by three guys belting out song cycle after song cycle with clapsticks pounding away and the didj doing its accompanying thing too. Just great. DW on the didj was awesome too - he had his mobile phone hanging around his neck and was using it to record bits of the session too! Only bad thing was they sung for so long my bum got sore and my bare feet and hands were dinner for a number of mozzies. And this music is probably wasted on me too - I like it but don't know much about it so can't fully appreciate what I'm hearing. 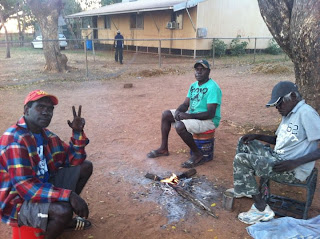 The session finally ended and the recording sounded pretty good (I'll listen to it properly today). We all went home back to our mundane Saturday evenings as though nothing special had just happened. But is was really pretty special if you ask me. I especially love that this great thing happened, not at my instigation but at the request of DW and that they did it all just for themselves, their families and for the maintaining of these songs. I was just the munanga that was in a position to help. Lucky me.
Posted by nginarra 1 comment: