Over the past 18 months I've been doing a lot of work helping Ngukurr mob to get the Ngukurr Language Centre up and running again. I won't bore you with the details but will say that I'm pleased with lots of promising developments that have happening in 18 months. I'm really hoping that the Language Centre will be in full swing again by the end of the year. (All this is thanks to the dedicated elders and language workers in Ngukurr who are committed and passionate about working on their languages).


The one thing I did want to share are the flash new logos for the Ngukurr Language Centre. They are based on a painting that the Language Centre commissioned Ngukurr Arts to do. The Language Centre committee came up with the idea for the logo/painting: three specific kinds of trees. Betty Roberts then did a great little painting of them and then a professional graphic designer turned the painting into a set of three interchangeable logos. I was the middle-man helping make it all happen and am very pleased with the result: 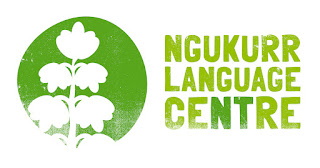 This one is a shade tree called mirnija in Marra (Scientific name: Cathormion umbellatum). 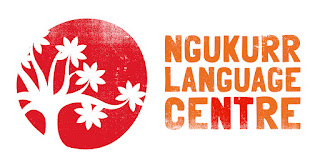 This one is a freshwater mangrove called murrnganawu in Marra. (Scientific name: Barringtonia acutangula) 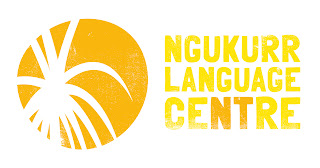 What do you reckon? Okay, I know logos and graphic design don't necessarily directly lead to language revitalisation outcomes but hopefully it contributes to building a strong Ngukurr Language Centre which in turn will lead to it running lots of great language programs.