I don't often blog about what I get up to anymore. Too busy ranting about what other people are doing it seems! I never even blogged about finishing my thesis or getting a new job at the University of Queensland (as a Postdoc with the Centre of Excellence for the Dynamics of Language). That was all last year though and I'm not going to go into that now. Instead, why not just pick up from where I am today, which is in Beswick community, listening to a raging wet season storm going on outside. It's night-time now but here's the view from my awesome accommodation this afternoon: 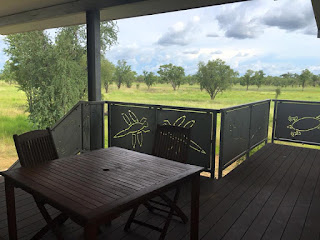 Today was the first day in which I started my new research project proper (that is, actually getting out and about and making recordings, rather than doing preliminary office-based stuff). My current project (which I'm just calling Kriol Proujek for now, for simplicity's sake) is an attempt to find out how Kriol is different in all the communities it is spoken in, east of Katherine.

Like any language, Kriol varies from place to place. Every Kriol speaker knows it and can tell you about it. Like English has Australian English, American English, British English and so on, Kriol has similar variation. And just like us English speakers can talk at length about what we say different to Americans or Poms, Kriol speakers can do the same. My project tries to capture that variation. Not too dissimilar to all the cool stuff that's been in the news lately about variation in Australia English, except that this project is smaller scale and on a different language.

So today I finally got started with making recordings and headed to Barunga, 70km from Katherine, where a team of local women are already working as language research assistants. They were a great help. Two women offered to sit down and go through a whole bunch of questions and ended up doing a 90-minute interview with me. So good! Except now it will take ages to go over such a long recording - the joys of sociolinguistic interviews.

I was pleased with my first interview. I tried to mix it up with sections of conversation, a bit of telling stories, a picture task that aims to obtain comparable stories across everyone I interview, questions about how they perceive and identify different Kriol dialects and also going over a few lists of words that I know are only used in some places. It worked well and didn't seem to be a mind-numbing experience for the women I interviewed.

A few tidbits of what I learned? Well I already guessed or knew some of the obvious differences. Key differences between Ngukurr Kriol (that I speak) and Barunga Kriol are the pronunciation of words for 'there' (jeya vs deya) and 'that one' (tharran vs darran) and different words used for 'eat' (dagat vs. idim) and listen (irrim vs lisin). But there were a bunch of things I didn't know. Like the word for cousin (cross-cousin, to be precise) - the women reported that they say gaj (derived from 'cuz' i.e. cousin). In Ngukurr, you'll hear kas, but not gaj. In Ngukurr, you'll also hear barn.ga but the women I interviewed said they don't say barn.ga. The four grandparent terms you hear in Ngukurr all the time: abija, amuri, abuji and gagu - for the young Barunga women it was just nena (nana) and grenpa.

My favourite new word I learned though was a non-English based verb, something I wrote a whole chapter on in my PhD thesis. When you look surreptitiously, or 'peep', Ngukurr mob will use the verb ngarra. Barunga mob know ngarra too, but have another word they use: roihroi (or royhroy - where the 'h' is a glottal stop). Who knew?! Well... obviously several hundred people around Barunga knew, but I didn't. Haha.

I only had time to do that one interview today in Barunga but it was a good start. I'm optimistic about being able to go back for a week or so and make myself more known to more people and do more interviews. It will be a case of rinse, cycle and repeat as I try and do this across the whole region east of Katherine. I'm in Beswick now and will aim to do two more interviews before heading back to Katherine. Next week, I'm going to Minyerri for a few days to do the same thing.

Good ol' Australia Day. We all deal with it (or don't) in our own way. Typically, I lay low and don't give myself a holiday. I keep working and apply myself to some task pertaining to Aboriginal languages which relieves my coloniser complex somewhat.

I completely see how it is seen as a day of survival. Being exposed to endangered Aboriginal languages, sometimes I reflect on how remarkable it is that the languages have survived this far into colonisation at all. But that's just language survival. There are so many inspiring stories of Aboriginal people surviving particular events, discrimination and hardship. All Aussies value a good against-the-odds story. So this Australia Day, I thought I'd share a few survival stories that I find very moving:

I was just talking about this documentary yesterday when I caught up with a friend in Katherine - her mum was one of the kids who went on this walk. During the 2nd World War, the mission on Croker Island - which was home to kids who had been removed as part of the stolen generation - were running out of food and had to get off the island. The missionaries took them on a boat and walked them a few hundred kilometres to Pine Creek and they eventually spent the war near Sydney. It's an amazing tale and the documentary, Croker Island Exodus, is one of the best I've ever seen:


It screened on ABC a few years ago but I've never caught a repeat unfortunately, though you can buy it. So highly recommended. It's part historical documentary and part good yarn. One thing I loved is the kids they use in the recreation scenes are all descendants of the original 'walkers'. For me though, the kicker comes right at the end: old Alice, who is delightful and warm throughout the film, sits in a park and is asked about being removed from her family as a little girl. She's not bitter, she loves her Croker Island Family and has had a great life, but 90 or so years on, when she starts to talk about it, the tears flow. So much time, so much life lived, and a happy elderly women still cries for the family she lost. Heartbreaking.

If there was one movie I could force all non-Indigenous child protection workers to watch, to demonstrate the effect of removing Aboriginal children from their families (which happens an awful lot - yes, today), it'd be this one.

For an extended interview with the film's director go here.

Just over four years ago, Kwementyaye Briscoe was drunk and left to die in a police cell in Alice Springs. Aboriginal deaths in custody aren't supposed to happen anymore. And certainly not like that. Kwementyaye Briscoe is far from the only Aboriginal person to have died in custody in recent years, but the reason I mention this, is because of this interview with his aunt, Trisha Morton-Thomas, following the coronial inquest. It floored me when I saw it and it still makes me cry. I feel a little reserved about sharing it because Trisha seems quite vulnerable, but then again, she probably agreed to the interview knowing its rawness would be powerful. And it is:

Every time an Aboriginal person dies in tragic and unfair circumstances, family have to survive and Trisha's interview gives a sad-but-eye-opening window into what that is like. When asked what should happen if police are found to have been negligent, through tears Trisha says: "What I think should happen, is this should never happen again".

Yet what is so amazing about Trisha Morton Thomas (who you may recognise for acting roles in things like 8MMM and Radiance) is that later that year, she appeared in an episode of Redfern Now that dealt with exactly this issue. She played the mother of Luke Carroll's character, Lenny, who dies in custody. It is absolutely extraordinary to see her in that episode. Without context, she's fantastic. With context, it blows my mind. Again, I can't find a clip but here's the preview - unfortunately without Mona, but if you look at ABC's web extras, the Making Of clip shows a bit more. I don't think survival gets much tougher than that.

If you can stomach it, here's the coroner's report relating to Kwementyaye Briscoe's death.

Lastly, and turning to language themes, in 2015 the Ngukurr Language Centre's, Grant Thompson, put together a short doco called Bla Mela Langgus "our language(s)". It's about the survival of traditional languages, in a place where language loss and endangerment is obvious and of community concern. Grant did a tremendous job, assisted by Jenny Denton, and I'm completely biased with my affection for the video. It did go on to win a community broadcasting award, so I'm not the only one who loves it.

Unfortunately, Indigitube (where the doco is hosted) doesn't seem to have an embed function, so just follow the link: http://www.indigitube.com.au/video/item/2500

I know all the people on the video and they're all treasures. Through all the language work I've done at Ngukurr, I'm continually amazed that people still carry on trying to support their traditional languages when they are so embattled. Survival personified, if you ask me.

Well that's all I wanted to share. Obviously this is a drop in the ocean. If you have some similar stories or videos of survival that have stuck with you, I'd love to hear them. And hopefully you've got something out of the one's I've shared.
Posted by nginarra No comments:


After Twitter added a poll function, I realised it could be a neat way to instantly transmit some little Qs about Kriol to a few hundred people. For a language like Kriol, this can be especially useful because there really are very few avenues for non-Kriol speaking people to learn (or learn about) Kriol. Yet there are hundreds of such people living and working with and around Kriol speakers across a large part of Northern Australia. I regularly get requests or hear concerns about the lack of opportunities out there for people to learn Kriol. The Twitter questions are, of course, not going to fill that gap but hey, it's something!

I've been trialling it for a couple of weeks now and it seems to be getting a bit of response. Here are some examples:

I do post the answers as well but unfortunately, Twitter doesn't easily allow for much further explanation, e.g. about Kriol's distinctive spelling system, or any finer points of grammar, usage, or dialectal variation. But until a proper Kriol language learning course comes along (and it's on my to-do list!), it hopefully makes some small contribution.

I also think it's a nice way to use Twitter to promote language learning/education. I haven't seen anyone else using it in this way. I'd be curious to know if it's something that others are doing or might consider trying for other languages.