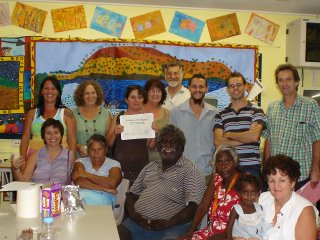 Now that I've been working with Aboriginal languages for quite a while now, there's one question that I've lost patience for. It usually goes along the lines of:

"So are they really different languages or just dialects of the same language?"

At least that's a more intelligent version of:

"Is there, like, more than one language?" (Try about 300 throughout Australia!)

Then there's the downright shudder-worthy:

"So do you speak Aboriginal?"

I don't want to start getting snobby about this because it's not like any whitefolk in Australia were ever taught anything about Aboriginal languages in school or anything, so it's not their fault they are uninformed. But unfortunately, my patience for such questions has worn thin.

Moving on from there, I'm continually amazed at actually how diverse the languages I work with are. In a way, it's quite absurd. At Language Centre the other week, we made a chart that goes in the kitchen area. It has the words for tea, sugar, milk, water and biscuit (lit: non-meat food) in five languages - Marra, Ritharrngu/Waagilak, Rembarrnga, Ngandi and Alawa. The words (in that order of languages) are as follows:

You can see that there are a couple of shared words and a few closely related words, but a lot of them just simply aren't related at all. At least with English and German and French you can usually see how words are related.

If you wanted to relate the diversity of those five languages here at Ngukurr, to European languages, you'd probably want to say they're as different as English, German, Italian, Romanian and Hungarian.

No wonder Kriol has flourished here.
Posted by nginarra 2 comments: