"...Council is part of the Katherine community..."

"... we have a social responsibility to contribute to the growth of the town..."

Positive rhetoric like the above is par for the course for any Australian local government. The above quotes come from Roper Gulf Regional Council's CEO Michael Berto. Great messages? Definitely. One major problem though: the town they refer to - Katherine - isn't part of the council's area.

Roper Gulf Regional Council covers a massive, sparsely populated area reaching from east of Katherine right out to the Gulf of Carpentaria coast. It came into being 10 years ago when the NT Government oversaw the establishment of 'Super Shires' - amalgamations that subsumed a stack of community government councils which were often local government areas with only a few hundred constituents. 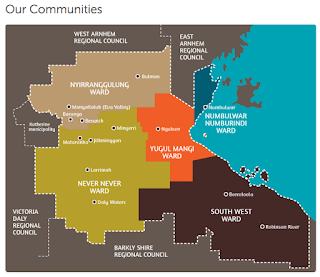 The creation of 11 'Super Shires' a decade ago was an unpopular move. Poorly consulted and hastily done, some say it caused Labor to lose the next election, which then brought in the resoundingly ridiculous Country Liberals' effort. I was living in Ngukurr when the council amalgamations happened. At the time, the locally-based Yugul Mangi Government Council oversaw the communities of Ngukurr, Urapunga and Minyerri. It seemed like a small, inefficient and challenging local government to run. What Yugul Mangi and other mini-councils did have in their favour was the ability to foster local decision making and create local leaders. The counter-argument was that small government authorities like Yugul Mangi have tiny economies of scale and little bargaining power. Amalgamation will bring muscle. A reasonable point.

What worried me at the planning phase wasn't the likely watering down of local input and authority. I was more surprised to learn that administrative headquarters of the new shire weren't even going to be within the shire. It created a bizarre contradiction: create a new shire because it makes economic (rather than social) sense, but administer it from outside the area therefore sending all related economic activity to a different council.

But again: practicalities. The amalgamations were rushed. Katherine was the only decent sized town in the vicinity that was ready to handle Roper Gulf administration. But it didn't make sense - certainly not in the long term. "What about Mataranka?" I asked when we were briefly 'consulted' at the Language Centre back in 2006 or 07. My question was dismissed.

Mataranka is a much smaller town - about 500 people - and an hour down the road from Katherine. It had its own community government council back in 2006, meaning there was at least some capacity to administer local government. Mataranka is hardly a metropolis, but it has decent accommodation and places to eat, some facilities and infrastructure, Elsey National Park is right there and Katherine not far away. If running Roper Gulf from Mataranka wasn't immediately viable a decade ago, it would have been an entirely appropriate strategy to aim for in the future.

But what happens in real terms when a local government bases itself outside its own area? In day-to-day terms, it is inevitable that you are less aware and less invested in your own service provision. When council workers live and work in their council area, they notice what happens immediately beyond their front door: what are the roads like, waste removal, recreation facilities, what sort of community and local cultures are fostered in your neighbourhood? When there are problems, they are noticed. And hopefully addressed.

However, when the front doors of key Roper Gulf staff open on to Katherine Town Council's area and vote in Katherine Town Council elecdtions, how can you be personally invested in ensuring your council is the best it can be? Instead, Roper Gulf residents - who are mostly Indigenous and non-native English speakers - find themselves reporting to staff in Katherine about the realities of life in the council region. That hardly seems efficient, or fair.

Yet this awkward, unfortunate state of affairs is not something that seems to cause embarrassment. As the quotes at the top show, Roper Gulf Regional Council is proud to be "part of the Katherine Community". That quote was in the Katherine Times in October 2017 following Roper Gulf publicising a $1.14million infrastructure investment and $1.42million in tenders going to Katherine businesses. That is, investments going outside Roper Gulf towns and communities. If the decision ten years ago to base Roper Gulf in Katherine was due to practicalities and time pressure, a $2.5million spend 10 years later is a side-swipe to its own constituents. And far from acknowledging this as regrettable, it is something Roper Gulf are proud of: 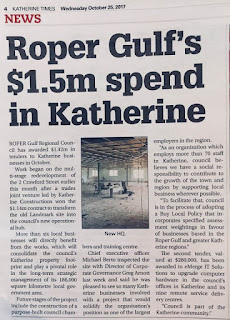 But what's the alternative? Could Mataranka be the administrative centre of Roper Gulf? Right now, probably not. Because no-one has tried to make it happen. But if strategies had been implemented 10 years to transition Roper Gulf's administration to within its own area, it could have happened. I used to work at Batchelor Institute: a large tertiary institution an hour south of Darwin, in a town of only a few hundred. The parallels between Batchelor/Darwin and Mataranka/Katherine are obvious. Some Batchelor Institute staff live in quiet Batchelor, nestled next to Litchfield National Park. Others live in Darwin. Darwin-based staff are provided with a daily shuttle bus commuter service and it works effectively enough. The same could absolutely be done for Roper Gulf employees who live in Katherine but had their workplace in Mataranka. And for Roper Gulf residents - especially those in Mataranka - they have a better chance of working at and accessing their administrative centre.

If the commute seems inefficient, there is an efficiency benefit: most places in the council region are an hour closer to Mataranka than Katherine. More than half the region would have two hours cut off round trip travel times between headquarters and community. Imagine being a Robinson River resident with your local government authorities a 20 hour round trip away and not even in your region. Would you feel like your council staff have your best interests in mind?

If Mataranka as Roper Gulf's administrative centre is logistically possible, it requires motivation, vision and long-term strategy. The benefits would be significant. More Roper Gulf staff would know first-hand what their service provision is like. Roper Gulf Council would be considerably building the economy of Roper Gulf itself, rather than investing in someone else's Council area. The inconvenience of Katherine-based staff having to work from Mataranka rather than Katherine? If Roper Gulf demonstrated that developing its own area was a core part of its vision, it could be possible to motivate its staff that a Mataranka base was for the greater good. Such motivation just doesn't seem to exist.

If Roper Gulf constituents are worried about the benefits their local government pours into Katherine, their concerns are largely voiceless (unless you consider Labor's 2012 election loss to have been a voicing of such concerns). Geographic, cultural and linguistic boundaries mean that most Roper Gulf residents have difficulties speaking up. However, a recent semi-public Facebook discussion (following the recent news story shown above) shows that for some it is a cause of disappointment or concern: 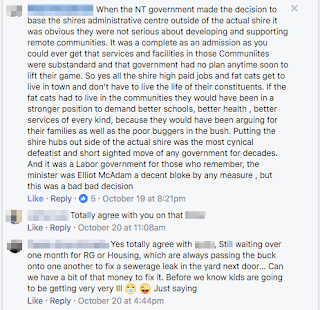 Apart from a few murmurs, there is not a lot of obvious discontent about the current state of affairs. Katherine residents and council certainly aren't going to speak against the economic boost generated from having Roper Gulf as "part of the Katherine Community". Katherine-based Roper Gulf staff (generally the most powerful players in the entity) aren't going to volunteer to uproot themselves or their workplace. And Roper Gulf constituents have never been told that an alternative to the status quo is possible. But I argue that it is possible. It's just easier for Roper Gulf Regional Council to bizarrely stay as one of the only local government councils in Australia to be administered from outside their bounds. "Defeatist"? "Short-sighted"? Weak? Insulting? Take your pick.

A further note: I know plenty of great people who work for Roper Gulf and it is not my intention to disparage any individuals. I am writing about the overall vision and strategy of the entity which is larger than any individual.
Posted by nginarra No comments: