Today is Territory Day and while I am a proud Territorian in many ways, it's a challenging place and there is lots going on here that I don't particular like or value. Any long-term readers of my blog will probably notice that I've become increasingly jaded over the years and am now thoroughly disillusioned with many things that happen in the NT, like the Government's poor record of education delivery in remote communities and the increasing push for mining development that undermines environmental concerns and Aboriginal relationships to country. My list of gripes is pretty endless.

A constant on that list is the neglectful treatment of Aboriginal languages and failure of so many to value the amazing linguistic diversity found in the Northern Territory, which has been diminishing unabated for decades now. Official language policy in the NT fits nicely within what gets described as a 'Laissez-faire policy' where Aboriginal languages aren't explicitly denigrated, just forgotten about and left to wither:


Laissez-faire policies mean that the languages of power and prestige will eventually take over in all situations of contact. Benign neglect …[is] always de facto support for the language of the group that is already dominant. - Wright (2004: 187). Quoted in Sallabank Julia & Austin Peter K., Cambridge Handbook of Endangered Languages, 2011.

For a language to have a good chance of survival, more needs to happen than just having it spoken at home and learned by kids as a mother tongue. Healthy languages are found in many more domains than that. They're used in the marketplace and in commerce. They're used in artistic expression. They're used in schools as a tool of education (hence I keep banging on about the importance of bilingual education). They're used in various levels of government, maybe in courts too.

Another crucial domain is media. Which is why I am absolutely over-the-moon to learn today that the ABC is trialling the provision of a news service in two NT languages: Warlpiri and Yolŋu Matha (or more specifically, Djambarrpuyŋu). All of a sudden, I have something to be very proud of on Territory Day! Good on the ABC for this initiative and also to the NT Government's Aboriginal Interpreter Services for getting the language content together. 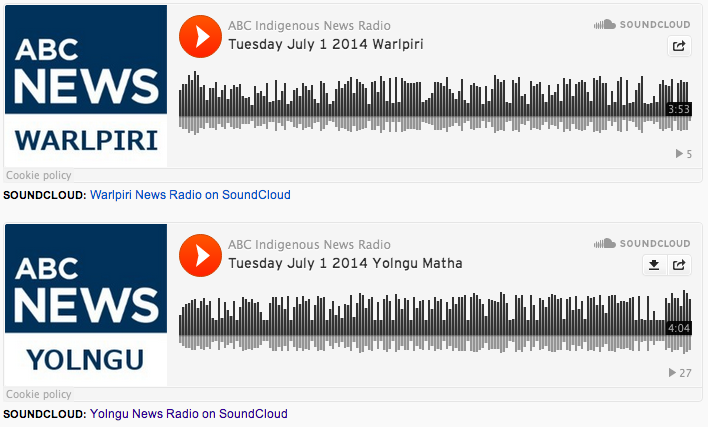 Symbolically, this means a lot for the status and vitality of these languages. Communicatively, I really hope the reports find an audience and result in better dissemination of news. There are several thousand speakers of both Warlpiri and Djambarrpuyŋu, spread across a number of decent-sized remote communities. I note that the ABC is encouraging localised remote broadcasters to rebroadcast the reports and I hope they do. I wish the ABC and all involved good luck with the venture. The gesture and effort is already greatly appreciated by this renewedly-proud Territorian!
Posted by nginarra

Such great news! It's really nice just to be able to hear both the languages (and when you listen to both from today it's pretty clear just how different the languages are). I'd love to see the news in Kriol too.

I had to change the file extension from .wav to .mp3 to get it to play.

The language is great! But what really struck me in the Djambarrpuyŋu broadcast was the intonation. It's newscaster intonation, sounds quite different from other Yolŋu genres. Now I want to get a corpus of the broadcasts together!

Sounds to me like regular reading intonation (I mean, not just newscaster).

Steve from the Alice said...

Hi David, you and I and many others, from all countries, political and religious perspectives, have been on the front lines and/or behind the lines for many years fighting what often is a desperate and seemingly rear-guard action to promote Aboriginal languages. Most of the time, our efforts are just that--desperate defensive efforts.

Well, at the risk of melodrama, may I suggest that the Normandy beachhead has been established. In fact two beachheads--one in the north and one in the south: Yolngu Matha and Warlpiri.

Is it too much to believe that through AIS, my current employer, we have now placed into the hands of the speakers of two major languages in the Northern Territory the language weapons necessary to not just defend, but restore the rightful balance in the NT through these daily news summaries?

I should add, that AIS in its daily interpretations of the ABC news seeks not to distort the true message contained, often in hidden form with English jargon, but to reveal it.

I personally am trusting that speakers of the dozens of other languages, not only in the NT but in the other states will be inspired by this effort.

I couldn't get it to play. I'd love to hear what these languages sound like!

The two best ways to listen to the news in Warlpiri or Yolŋu Matha:

If you just the most recent reports, you can listen and download at: http://www.abc.net.au/news/indigenous/